To view the PDFs you will need the free Adobe Acrobat reader. Click below to download this software.

Pantheon Resources is an independent oil and gas exploration and production company incorporated in the UK with a 100% working interest in a portfolio of high impact oil projects focused on the Alaskan North Slope spanning over 150,000 acres. In Alaska, Pantheon has discovered resources in conventional reservoirs with multi-billion-barrels of resource potential. These discoveries are in multiple accumulations in a unique geographic location adjoining the export and transport infrastructure significantly enhancing commercial potential with minimal impact on the environment. Pantheon’s primary assets include two major oil appraisal and development projects named Greater Alkaid and Talitha which have both been drilled and proven oil bearing. There is also a host of other high impact exploration opportunities currently being matured. Talitha was drilled in early 2021 and discovered oil in multiple formations. These Alaskan North Slope assets, where Pantheon holds a 100% working interest offer multi-billion barrels of oil potential. All projects are beneficially located immediately underneath and adjacent to the major TAPS pipeline (Trans Alaska Pipeline System) and the Dalton Highway, the major transportation artery for the Alaskan North Slope(ANS) oil and gas activities with almost immediate evacuation possibilities for any discovered oil. This provides a major competitive advantage, both financial and operational, over all newly discovered oil fields on the North Slope which is important for a small company like Pantheon.

Pantheon’s acreage on the North Slope 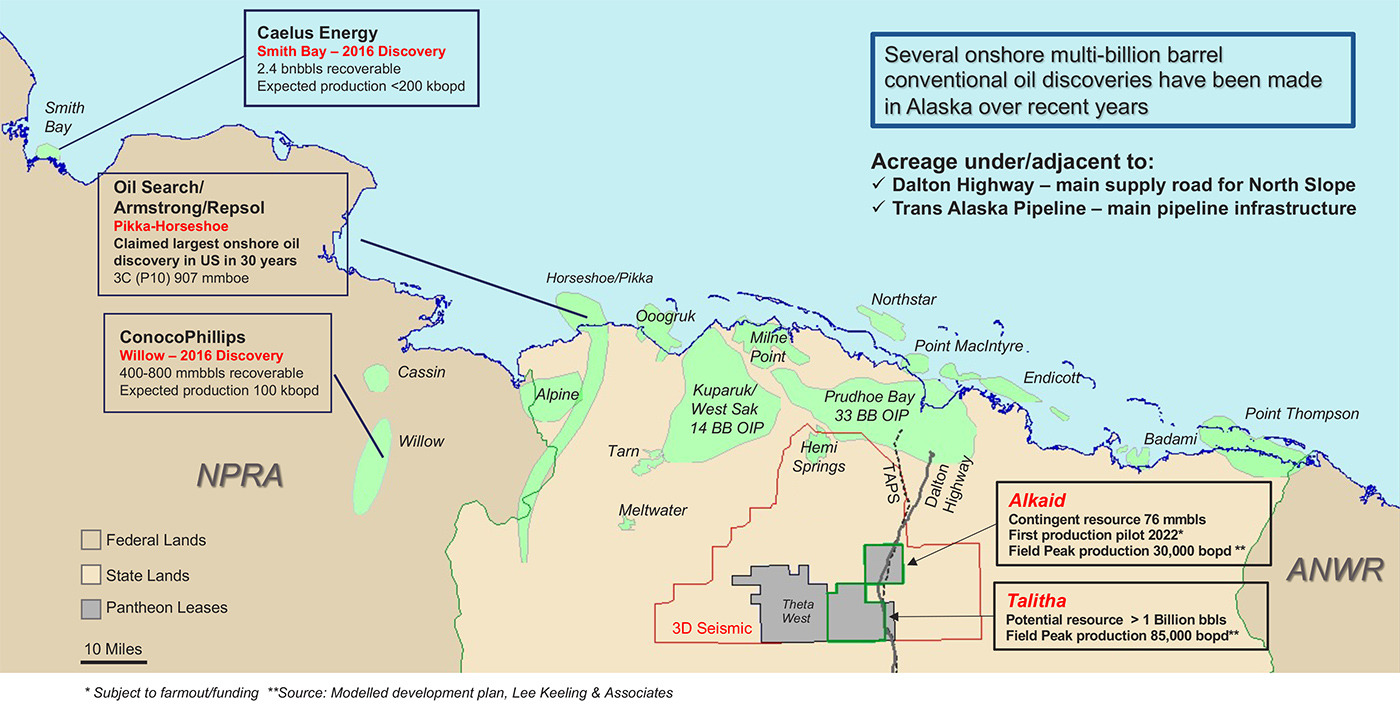 Pantheon’s near-term focus is to prove the reserve and commercial potential of its discovered resources at Greater Alkaid and Talitha where Pantheon believes a world class resource has been discovered. This includes discovered and tested light oil at Greater Alkaid and discovered light oil at Talitha in both the Brookian and Kuparuk formations. Recent work has continued to upgrade the resource potential in these two oil accumulations. The Talitha Area Unit (44,463 acres) and the Alkaid Unit (22,804 acres) were formally approved by the State of Alaska, Department of Natural Resources ("DNR") in November 2020. Both Units are near each other and are located adjacent to both the Trans Alaska Pipeline System ("TAPS") and the Dalton Highway approximately 20 miles south of the Prudhoe Bay Unit, and 25 miles southeast of Kuparuk River Unit which are two of the largest conventional oilfields in North America. 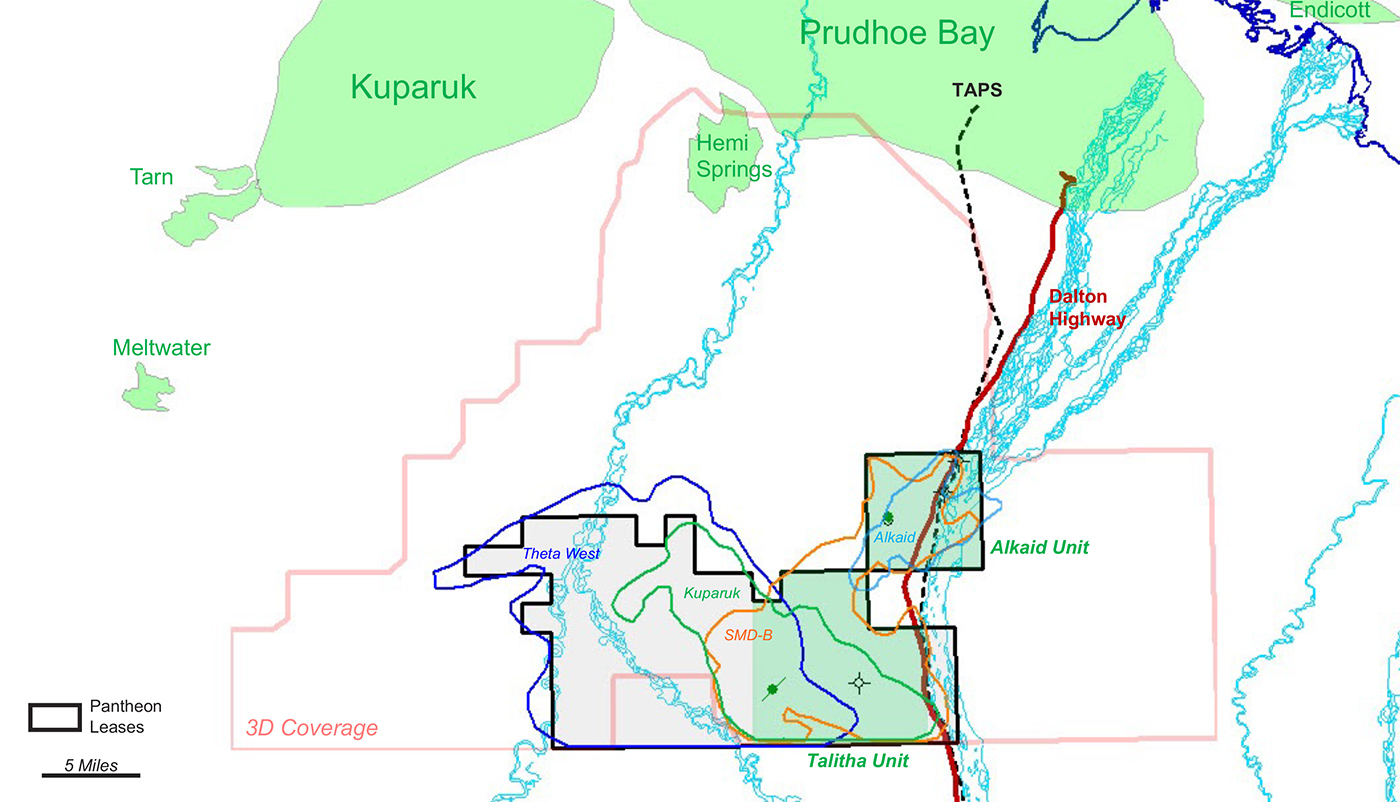 As well as the discovered resources at Talitha and Greater Alkaid, Pantheon has a host of high impact exploratory projects that it has continued to mature and in 2021 was successful in acquiring approximately 66,000 strategic acres in the State of Alaska's North Slope Areawide Lease Sale. The new leases are strategically positioned in two areas contiguous to its current project acreage and where it holds over 150,000 contiguous acres. The new leases now cover the prime acreage of the major projects at Alkaid and Talitha, as well as the new Theta West project.

Pantheon’s strategy is to maximise shareholder value by maintaining high working interest levels through the evaluation process and then pursue strategic drilling (and farm-outs if/where appropriate), prove up its assets, achieve an exit, and maximize value for all stakeholders. Given its 100% working interest positions Pantheon has the capacity to tactically use farm outs as a method of funding, to subsidise future operations with a strategic partner(s).

Pantheon has a very experienced Board and strong advisory group who are all shareholders with proven track records in the oil and gas industry, and of building profitable companies for sale. Pantheon’s board and management team also have a deep history with oil and gas operations in Alaska.

The Alaska North Slope (“ANS”) is recognised as a prolific oil province that has been in production decline for several decades and despite decades of production is still producing in excess of 500,000 BOPD. The emergence of new geological play types and recent discoveries have promised to address the production decline with an expectation that production will increase over the coming decade. Despite decades of activity, the North Slope remains underexplored and is rated as an immature exploration province in terms of well density-to-reserves and production, confirming the immense potential proven by recent discoveries. In January 2019 Pantheon acquired the assets of Great Bear Petroleum ("GBP"), a focused ANS oil and gas company. GBP had been operating on the ANS for almost a decade and over US$200m had been invested in the project at that time, providing a comprehensive understanding of the subsurface through a proprietary dataset. The ANS hosts the largest conventional oil and gas accumulations in North America and has experienced an exploration revival over recent years which has yielded among the largest conventional onshore oil discoveries made anywhere in the world.  These discoveries all tested high production rates of good quality light oil from conventional reservoirs. Drilling by Pantheon/GBP and adjoining operators has highlighted the significant prospectivity of Pantheon’s acreage, offering billions of barrels of oil potential in stacked conventional targets across multiple geological plays. In 2019 Pantheon successfully flow tested the Greater Alkaid discovery well, producing light oil which has been independently certified to host a contingent resource of close to 100 million barrels of recoverable oil (see Greater Alkaid section). More recently the company has confirmed the discovery of large volumes of oil at Talitha (see Talitha section) where it estimates the resource potential to be well in excess of one billion barrels of recoverable oil.

Pantheon is a large leaseholder on the ANS where it controls a 100% working interest in large, mostly contiguous acreage block, south of the giant Prudhoe Bay and Kuparuk oil fields. This acreage is covered by c.1,000 square miles of mostly proprietary 3D seismic and contains several existing discoveries and a host of world class exploration prospects. Apart from being a proven prolific oil province, Pantheon’s acreage position is operationally (and commercially) advantaged by its immediate proximity to the Trans-Alaska Pipeline System (“TAPS”) and the Dalton Highway which both pass through its leasehold, enhancing near term commercialization opportunities. Such proximity to infrastructure provides Pantheon with a significant competitive advantage versus other operators, with materially lower development and production costs and more rapid commercialization opportunities, yielding higher per barrel NPV’s. For decades, the Alaska North Slope had been the domain of major oil companies because of the logistical and technical challenges of operating in what is a challenging environment (arctic conditions). Technological advancements in both equipment, drilling and completion along with subsurface interpretation methods have significantly reduced risks and improved project economics, particularly regarding directional drilling techniques and development options including modular production systems that can be scaled to suit individual projects. These are low cost with rapid installation potential and suit operators like Pantheon developing oil near established infrastructure.

Being in the USA, Alaska enjoys one of the lowest sovereign risk ratings and best fiscal regimes for petroleum development in the world which is ideal for a small company such as Pantheon to pursue impactful oil ventures.  IHS Markit which is a global research company specialising in oil and gas believes the ANS is “Super Basin ready for oil resurgence as oil production expected to grow 40% in eight years”.  There are few “Super Basins ” recognised around the world that need to meet certain criteria of both size and commerciality – the ANS does achieves this  (https://news.ihsmarkit.com/press-release/energy/alaska-north-slope-super-basin-ready-oil-resurgence-oil-production-expected-gro) In 2021, IHS Markit named Pantheon’s 100% owned Talitha #A well as one of the 10 largest oil discoveries in the world.

You can keep in touch with the Company's progress by signing up to our news feed or visiting the press release section of this site. Photographs of drilling operations can be found in the Image Library.