To view the PDFs you will need the free Adobe Acrobat reader. Click below to download this software.

The Alkaid #1well was drilled in 2015 adjacent to the Dalton Highway and Trans Alaska Pipeline System (TAPS) - the primary transportation highway and major export pipeline (TAPS) on the Alaska North Slope respectively. Drilling of the well was terminated prior to the well reaching target depth for environmental reasons; the nearby Sag River flooded which ultimately led to the Dalton Highway being closed to all traffic for a number of weeks. As a result Alkaid was comprehensively logged but no production testing was conducted at that time due to the urgency to conclude operations and demobilize all equipment prior to advancement of the flood. Importantly, the well had encountered 400 feet of gross pay when operations were concluded, however, promisingly, there was no oil water contact encountered and this the Company believes potential exists for several hundred feet of additional gross pay. Activities recommenced at Alkaid in 2019 with Pantheon successfully production testing the Primary Zone of Interest which is contained within the same Brookian section that has proven so successful in the recent drilling campaigns of other operators regionally. The recent oil discovery at Talitha #A in the Shelf Margin Deltaic formation has also upgraded the potential for the Shelf Margin Deltaic to be oil bearing on the Greater Alkaid structure as well. 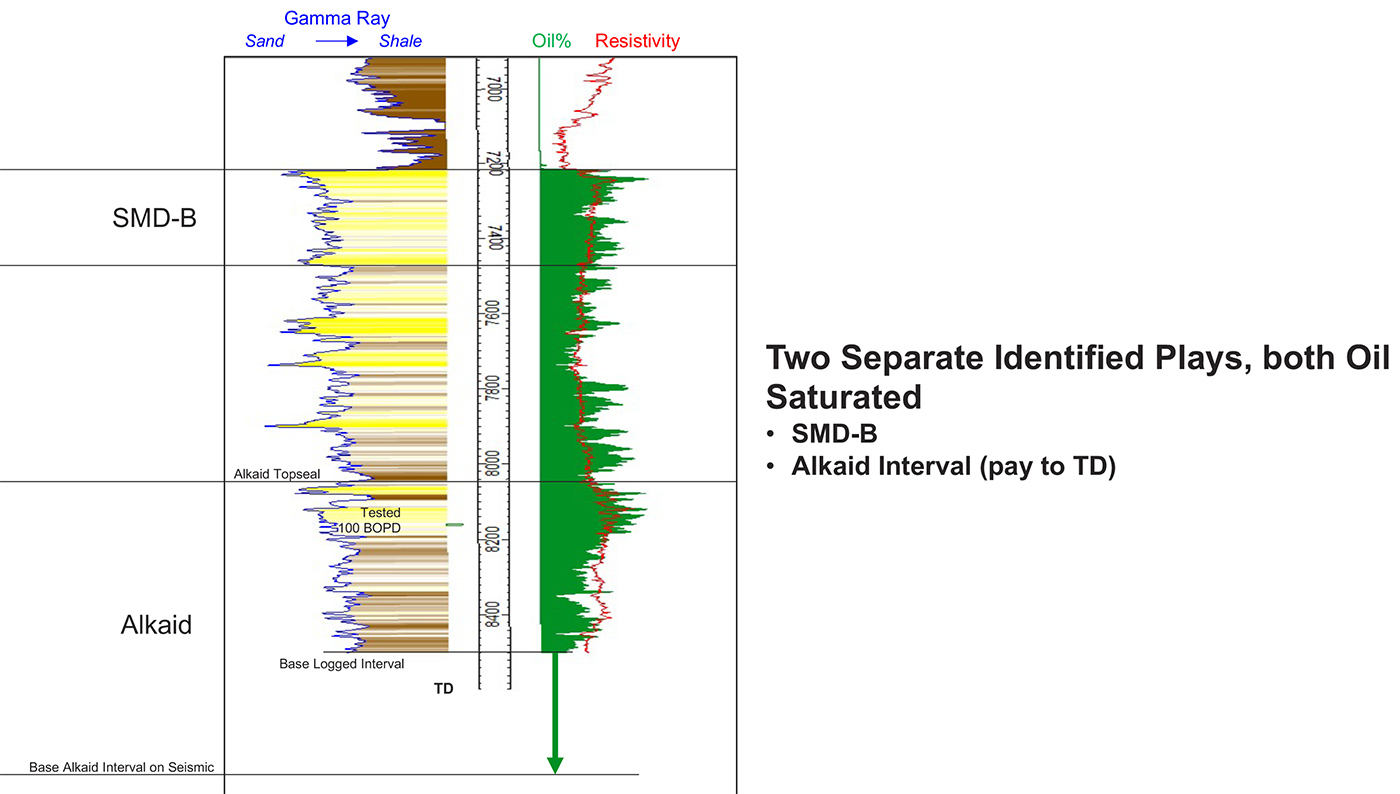 Data acquired from the Alkaid well included extensive sidewall coring, formation imaging logs and the oil reservoir flow test. A number of expert consulting firms performed detailed petrophysical analysis with all confirming similar results, thereby providing increased confidence on the potential of this project. The Alkaid well encountered 400 feet of gross pay with 240 feet of net oil pay and no water contact, testing high quality 35 deg API light oil. This result upgraded the adjoining Phecda segment which is now mapped with Alkaid to be part of one large ‘Greater Alkaid’ structure. The Alkaid well tested an average 100 bopd via a small “through-tubing single frac”. Only 6 ft of the 240 ft net pay interval was perforated, accessing only a fraction of ultimate well productivity. Pantheon estimates that horizontal development wells could potentially produce as much as 2000 bopd with recoveries of 1.5-2.5 million barrels per well. Primary recovery is conservatively estimated at 10-15% yielding 90-135 million barrels of recoverable oil from the estimated 900 million barrels of oil in place (“OIP”) but could be significantly higher with optimally located and designed wells. In order to maximize Alaskan Tax credits at the time, the Alkaid well was located a State mandated minimum distance from the nearest well and hence only penetrated the of the structure. Recent high tech seismic imaging clearly indicates that better reservoir can be expected in the heart of the accumulation, hence recoveries are expected to improve materially. The successful application of secondary recovery techniques could further increase ultimate recoveries, adding major upside potential to this project. The Company plans to use an early production unit (EPU) as part of a pilot testing operation to yield early cashflow as well as acquiring valuable production data to assist future development planning. Ultimately a Central Processing Unit (CPU) with full facilities will be needed to fully exploit the resource potential. Pantheon’s Alaskan projects will utilize unconventional oil production technologies applied to conventional oil reservoirs in order to maximize reserves and production which has now become standard operating procedure across the entire Alaska North Slope (“ANS”). The industry has transferred these technologies into Alaskato develop this higher quality oil in stratigraphic Brookian sections containing billions of barrels of recently discovered oil. The Greater Alkaid oil accumulation sits underneath and adjacent to the TAPS pipeline and the Dalton Highway making it uniquely ideal for year-round “Phased Development”, minimizing cost and offering early production potential with significant advantages to other remote oil field developments on the ANS.

Independent Expert report completed in 2020 on the Greater Alkaid oil accumulation ascribed 76.5 million barrels of certified recoverable reserves with a calculated NPV (10) of $595m for this singular project (at the then prevailing realized oil price of $55/Bbl held flat). This estimate discounted certain parts of the field by 50% and hence is considered by the Company to represent a conservative estimate. A single development well is planned for 2022 that will be completed as a pilot test producer which could yield early cashflow and near-term payback. Being onshore and adjacent to established infrastructure provides opportunities for phased development to manage cash flow and risk associated with development. The ultimate development concept model will involve a Central Processing Facility adjacent the highway and Trans Alaska Pipeline with approximately 44 wells targeting with peak production of circa 30,000 barrels of oil per day. A phased development means a bulk of capex could be funded through production revenue hence yielding high IRR’s. Expected development of Talitha will leverage off the Greater Alkaid infrastructure, hence improving economic returns. A major benefit of Alkaid over other projects on the Alaska North Slope is that wells can be rapidly brought onto production after testing by trucking the oil to Pump Station #1, about 20 miles north of Alkaid. Alkaid's location, underneath and adjacent to the Dalton Highway and the Trans Alaska Pipeline System allows the placement of a drill pad next to the Dalton Highway which offers the ability for year-round activity as well as other material advantages.

Pay from Top SMD(B) to TD 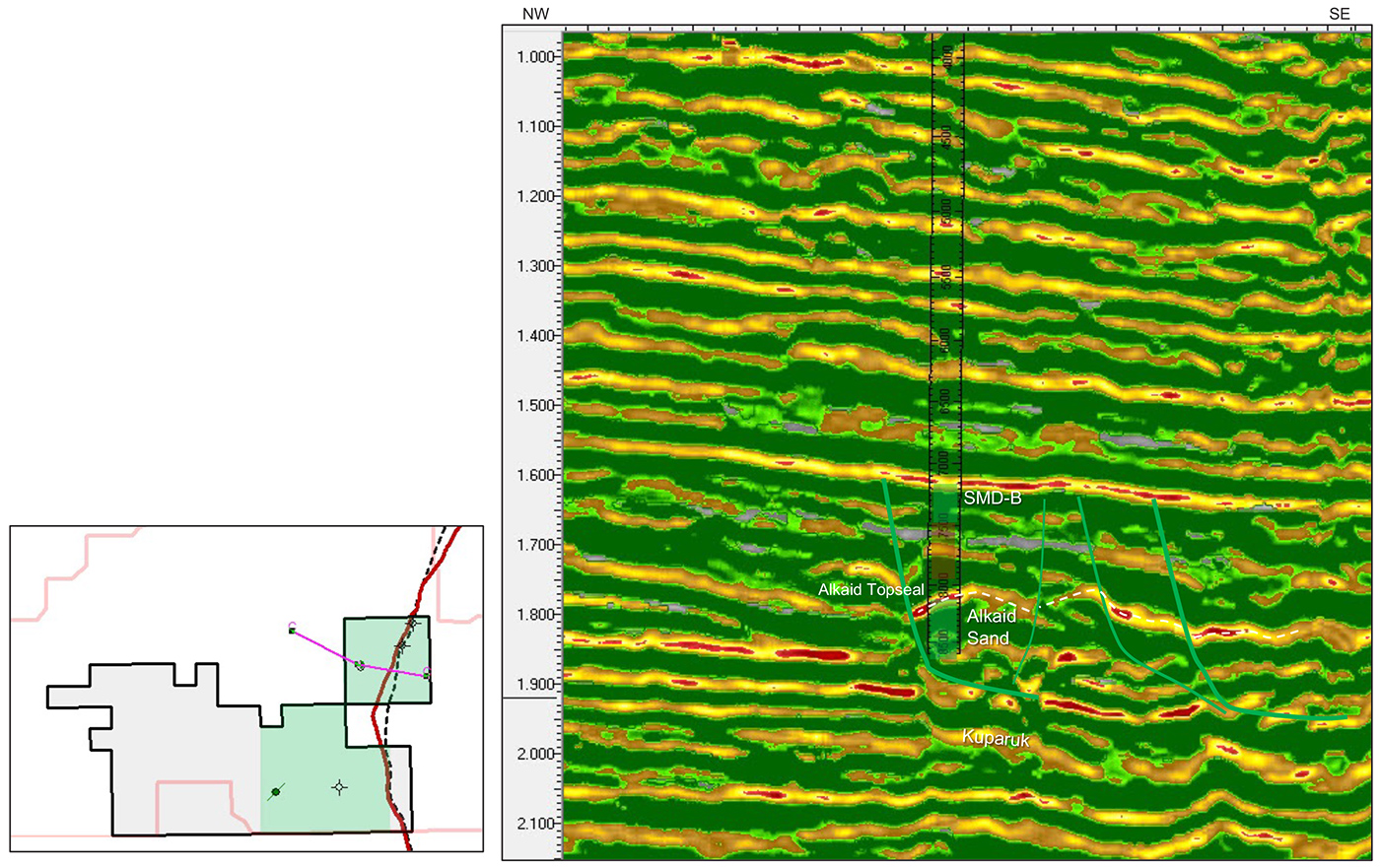 Pantheon was awarded a unit over Alkaid where it submitted a First Plan of Exploration ("POE") in November 2020 outlining its proposed activities in relation to the unit. These include a commitment to the reprocessing of approximately 50 square miles of 3D seismic as well as engagement of 3rd party specialists to produce an engineering study on a conceptual 'hot-tap' into the Trans Alaska Pipeline System ("TAPS"). There are no firm drilling commitments, however the POE proposes the drilling of two wells from gravel pads located adjacent to the Dalton Highway to allow year-round activity. Under the POE, drilling and long-term production testing on the first of these wells, the Alkaid #2 well, is targeted for Spring/Summer 2022. Dependent upon the results of Alkaid#2, the POE anticipates the drilling and testing of the Alkaid#3 well thereafter. GBP is a large exploration leaseholder where it controls over 250,000 acres, most of it contiguous, south of the giant Prudhoe Bay and Kuparuk oil fields which are the largest oil fields in North America. This acreage is covered by 3D seismic and contains several existing discoveries and a host of world class exploration prospects. With the exception of the Winx prospect where it has a 10% working interest, Pantheon’s working interest in all other acreage in Alaska is between 75% and 90%.